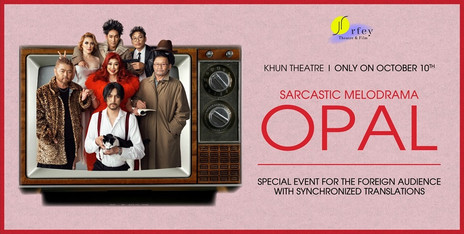 We are happy to announce that October 10th will be International Night at the Hun Theatre for our presentation of "Opal", a play by the American writer John Patrick, the most recent "Orfey Theatre" production. This night's performance will include simultaneous English translation which will be spoken by professional actors and includes listening device.

This play, which is a famous Broadway theater production, will be directed by M.Batbold who successfully staged the plays "Faust" and "Crime & Punishment" last year to public fanfare and sensation.

With this production, "Orfey Theatre" aims to spread feelings of kindness, hope and optimism that we sometimes find lacking in our day to day lives and in society. We want to fill the hearts of everyone who sees our "Opal" with love. Being different from M.Batbold's previous productions in terms of tone and content, "Opal" will be performed in a relatively small space, for smaller audiences and a more intimate experience.

The play "Everybody Loves Opal" was written in 1960 and performed at the LongAcre Theater in New York City in October 1961. Since then, it has been staged in theaters around the world, as well as on Broadway. John Patrick is known not only for various plays, but is the credited screenwriter for numerous Hollywood films, he wrote 34 theater plays and 27 screenplays during his lifetime. "Everybody Loves Opal" is his most famous play.